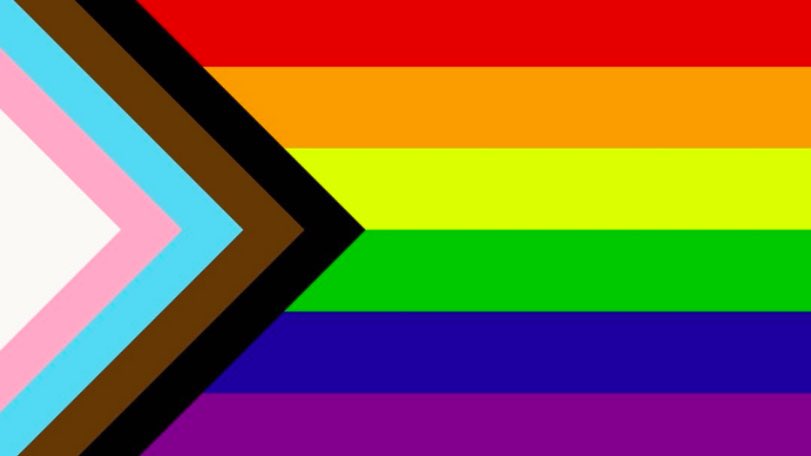 I don’t usually stray away from the format of writing advice and short stories, but I wanted to talk about things a little more long-form than I can on either Facebook or Twitter so, here we are.

That flag up there? That’s the Pride flag. A more inclusive Pride flag. As much as I love the rainbow, we need something like this because our movement, a movement that is supposed to be about liberation for all, keeps forgetting people.

Why do I bring this up now? With all the riots and police brutality happening right now, is a flag really that important? The short answer is; yes it is important. And that’s because it’s all connected.

Does anybody remember this flag? Do you remember when it was released? I do. The absolute vitriol the (mostly white) community had for those little black and brown stripes. The idea that anyone would change the rainbow to center or even just explicitly include black and brown people enraged them. That rage reached a fever-pitch when the flag I posted first was introduced.

Because the truth of it is; that rainbow, which was supposed to represent everybody, really doesn’t. Over the years, it’s come to represent the capital-g Gay community. That is, it represents gay men, and more often than not, specifically white gay men. Sure, those of us who aren’t capital-g Gay men have our own flags but that’s not really united liberation, is it? And Black and brown communities, who spearheaded the LGBT movement for so long, are being pushed out of it. The solution? To explicitly include them, right there on our flag.

So why use the flag I posted first? Why single out the trans community? (trans colors are pink, blue, and white) To answer that, I’ll ask you a question. How many of you who aren’t part of the trans community had heard of trans issues before, say, 2015. For many of you, it was probably 2010 at the earliest. This gives the false impression, even to many within the LGBT+ community, that gender issues are kind of a new thing. They’re not. At the very forefront of the Stonewall riots were Black trans women and those same people have contributed so much to the cause since then. Many of the books burned by the Nazis prior to WWII contained academic transgender research. Despite all of this, they’ve been erased from the struggle, or, at best, been an extreme afterthought until they forced others to recognize them. That’s why we should use that flag. We need to recognize that the story of our struggles is the story of trans struggles, you can’t separate them.

So, I’d like a pledge. Use that flag to represent the community as a whole and designate yourself as anti-exclusionary. That means you will:

If there is anything I may have forgotten from this list, please let me know.

So, what does this all have to do with writing? As I said above, it really doesn’t have anything to do with it, I just decided to use my space to talk about something I’ve been thinking about. Except for, as writers, we are a voice. That’s our main thing, whether we like it or not. All works are inherently political, no matter how hard you work to keep “politics” out of it. With that in mind, it’s important to actually use our voice. Intentionally. To make sure that we are pushing for something that’s actually good instead of inadvertently advocating something we don’t want to. So, even if you use the flag and advocate loudly, take a look at your stories, what are you advocating? Hopefully what you want.